Mirny is a diamond mining town of 35,000 people. The open pit mine is 1.2km in diameter, and looks like it’s going to eat the town at any moment.

Open-pit mining began in 1957 and was discontinued in 2001. Since 2009, it has been active as an underground diamond mine. Strength Through Joy’ was the Nazi’s program for giving the people a holiday. It resulted in the building of the cruise ship Wilhelm Gustloff and Prora, 4.5km of brutalist seaside resort. Soon after completion, both were requisitioned for use in WW2. Prora is still there, fulfilling its original purpose as a seaside resort and youth hostel.

The Wilhelm Gustloff was sunk in 1945 with 9,400 people perishing, many of them civilians and it lies at the bottom of the Baltic Sea. It is estimated to be the largest loss of life in a single ship sinking.

A Galapagos island story in 2 parts:

a) The whaleship Essex (a whole insane story in itself and inspiration for Moby Dick) stopped for food and water. A crewman lit a small fire as a joke but it soon spread, consuming the island and making several species, unique to the island, extinct.

b) Over a century after the fire, Friedrich Ritter and Dore Strauch moved here from Germany in 1929 to live in their own personal eden. Others had the same idea, much to the annoyance of Ritter and Strauch. There follows a bizarre, convoluted series of events including torture, abuse and mysterious deaths. “

SMYRNA was a Greek city founded in antiquity located at a central and strategic point on the Aegean coast of Anatolia. It switched between Greek and Turkish control in the bloody Greco-Turkish war. As the war came to a head, Turkish forces entered the city and burned half of it to the ground. Since 1930, It’s been called Izmir. A guano mine was set up on this small atoll off the west coast of Mexico and the island became home to the workers and their families. Due to increased fighting during the Mexican revolution, they stopped receiving supplies from the mainland which resulted in many deaths.

The surviving males took a rowboat to get help from a passing ship seen in a hallucination but capsized and drowned, leaving 15 women and children and the solitary lighthouse keeper, Victoriano Álvarez. Álvarez proclaimed himself king and had a brief reign of rape and murder before being killed himself by Tirza Rendon. Almost immediately after, the survivors were rescued by a passing US ship. Terra Nullius means ‘nobody’s land’, territory that no one wants to control. The best example is Bir Tawil. Bir Tawil or Bi’r Tawīl is a 2,060 km2 (800 sq mi) area along the border between Egypt and Sudan, which is uninhabited and claimed by neither country. 642 people were murdered here by the Nazis in 1944, most were women and children as the men were either at war and the village was razed. Under orders from De Gaulle, a new village was built a little to the left and the ruins of the original would remain as a memorial. To this day it is as it was on the day the village was abandoned. Not far from Russia’s border with Norway, is an abandoned brutalist building that was the home to the Kola Superdeep Borehole – the deepest artificial point on earth at over 12km below the surface (there have been longer boreholes drilled since but this is still the deepest).

The project attempted to drill as deep as possible into the Earth’s crust. Drilling began on 24 May 1970 using the Uralmash-4E, and later the Uralmash-15000 series drilling rig.

Chacabuca is a Chilean ghost town set up to house workers for a nitrate mine but was abandoned 14 years later as synthetic nitrate became widespread and decimated the industry. Decades later, Pinochet used it as a concentration camp and surrounded it with landmines that are still there.

It is in the process of being restored by its sole inhabitant. 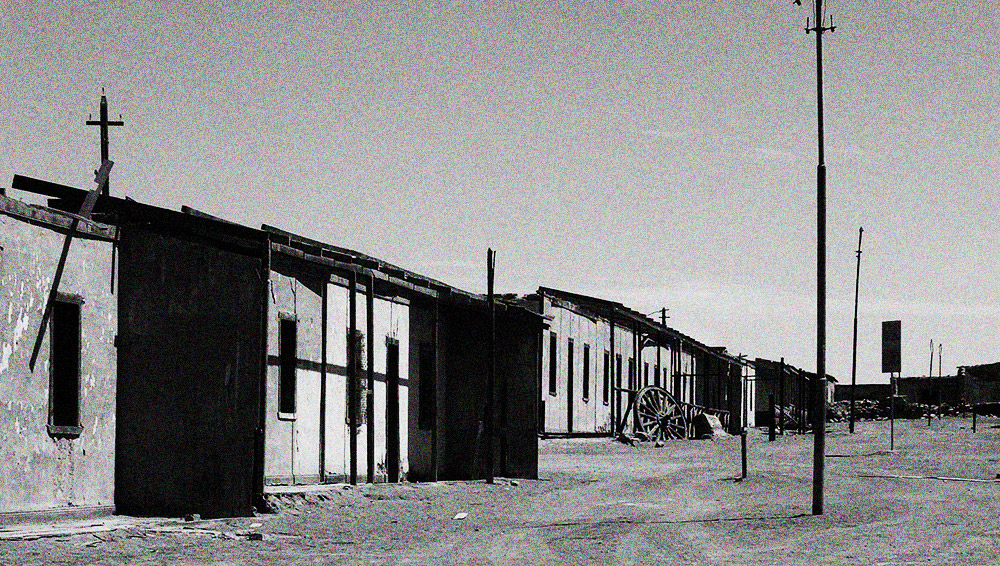 Zone Rouge are the restricted areas of France that lay contaminated after WW1 due to unexploded bombs and soil pollution. Some areas remain out of bounds to this day.

The Zone Rouge was defined just after the war as “Completely devastated. Damage to properties: 100%. Damage to Agriculture: 100%. Impossible to clean. Human life impossible”.